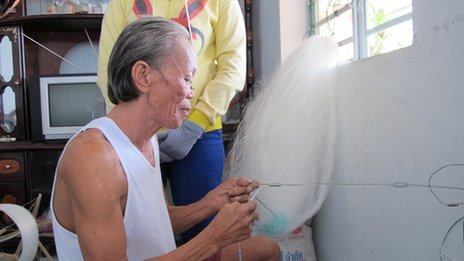 By
Marianne Brown Da Nang, Vietnam
Trinh Nhu Thuong is worried that the money they were given will soon run out. Thuong Nhu Trinh deftly tugs strands of nylon threads together at his two-room house, despite several missing fingers.
The 47-year-old's job - making nets - is the only reminder of his old life as a fisherman.
Now he lives on the outskirts of Da Nang, in central Vietnam. He is one of 363 residents moved from a former leprosy community about 30km away.
The community, Hoa Van village, existed for over 40 years on an isolated coast only accessible by boat. Last year, however, the local government moved residents to block houses in Da Nang to make way for a tourism resort.
Unlike many other cases of land confiscation in Vietnam, the Hoa Van families were offered compensation, with some receiving up to 500m dong ($23,500; £14,500). All were given the block houses for free.
Local authorities told state media that the houses were built "to help villagers embark on better lives".
'Not stable' Despite the cash, some are still worried about their future. Mr Trinh was offered about $9,000 but he has already spent nearly half.
"When we first got here we spent a lot of money buying things for the house," he says. "We also bought a motorbike for our son and paid a loan."

"Now we have 100 million dong ($5,000) left in the bank and sometimes we have to withdraw small amounts to buy a bag of rice."
At the moment the couple and their three children are living on the interest, about $30 dollars a month. Mr Trinh is reluctant to spend more because although families own the houses, they still have to pay for the land they sit on.
He says no-one has been told exactly how much that will be, but most estimate between 70-100m dong ($5,000). His partner Em Thi Tran is worried the money will soon run out. "The cost of living is much more expensive here," she said.
Making nets is the only job the family has got since moving, and earns him about $10 for two or three days' work. The couple's adult sons are out of work and their teenage daughter is finishing high school.
"It's not stable - sometimes he has work, sometimes he doesn't," Ms Tran says. "It was easy to earn money in Hoa Van village. When we lived there we could get rice to eat, grow vegetables and get fish and sell them so we could get money."
'Inferior' Hoa Van village was once known as Happy Haven Leprosarium, established by American missionary doctor Gordon Smith and his wife in 1968.
After the end of the war in 1975, the country's new communist government placed officials in charge of the hospital.
Bon Thi Nguyen, 56, lived there from the start.
"When I lived in Hoa Van village I didn't have leprosy but my father had it, but because I lived in the village people thought I had leprosy," she said.
"When I left the village for a short time people from outside the village didn't want to sit with you or eat a meal with you. They saw you as inferior and made you feel inferior," Ms Nguyen said. "If they are sitting next to a leper for example, and the leper touches a glass - they will not want to touch that glass." 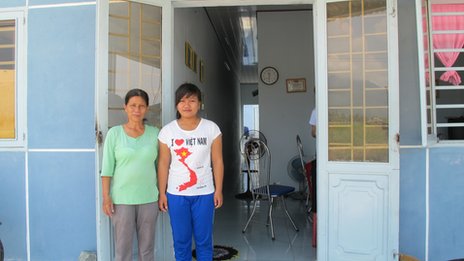 Bon Thi Nguyen (left): Relatives of patients still face discrimination
With 296 cases reported in 2012, Vietnam has the third highest number of new leprosy cases reported in the Western Pacific behind the Philippines and China.
Discrimination is still an issue, says Dr Cornelia Hennig, Vietnam-based leprosy expert at the World Health Organisation.
"Especially when the community sees disabilities. That can contribute to social rejection and discrimination," she said.
Ms Nguyen says she thinks today there is less prejudice, however.
"There is still discrimination but when we live in the community we can interact with normal people and gradually get rid of the discrimination."
Ms Nguyen says she is happier living in the block houses because people do not treat her differently. She is one of the few Hoa Van villagers who has managed to find a job. She works as a cleaner at a nearby hospital and earns about $150 a month.
"Not many people have a job now. Some people in this community, they have leprosy so they can't work. Others are old. In Vietnam if you're over 40 years old you can't find a job," she said.
Around the corner, 49-year-old Sau Thi Luong agrees. Ms Luong was diagnosed with leprosy when she was 18. Several years ago her right leg was amputated below the knee after she fell in a rice paddy and her leg became gangrenous. 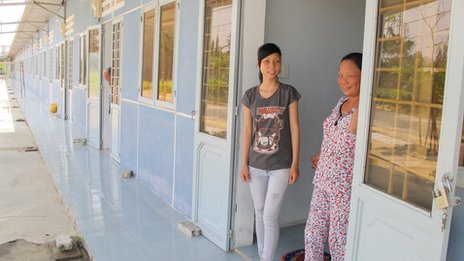 Leprosy patient Luong Thi Sau (R): I worry about money every day
After paying back a small loan from a government agency, she has $4,500 dollars left over from her compensation, which she keeps in the bank.
"When I first heard they were moving us I was scared because I thought I didn't have enough money to live in town and I didn't know how to make a living. I have a false leg and I was scared I couldn't get a job," she said.
"I worry about money every day. I'm worried I will have to withdraw everything from the bank and have nothing left for my daughter's education."
They receive some support from charity Children's Education Foundation (CEF), which helps families pay for students' school fees, particularly girls.
Founding director Linda Burn first went to the village in 2006 to support families there. She says some of the villagers are doing well after the move.
"We've seen houses expanded, more family members move in, we've seen a shop that's been built. It's a big shop and can produce a lot of money. So they have all responded differently and started up businesses differently."
CEF also helps Mr Trinh's daughter finish high school. The former fisherman says despite his family's money troubles, he thinks she will have a better future in their new home.
"With the income in Hoa Van village we could support the family better than here, but our daughter has better conditions for school here," he said.
"I miss my old life but if other people can live, I must be able to live too and support my family."