I have felt the happiness of children who receive new bikes.

Last Saturday, a group of students from Renaissance International School Saigon (in Ho Chi Minh city) presented 47 bicycles to CEF children who didn’t have a bike or they had a bike that was now broken and too old to repair further.  I didn’t join in on that trip because I had to do a very long day of home visits in the mountains the following day. Although I could feel the happiness from the families when they got our phone call about getting a new bike, I couldn’t feel how much excitement and happiness the children experienced until I saw them with their new bikes and heard the stories they shared about their new gift on the home visit day.

Many of these children rode their new bikes from the hall where they received the bikes to their homes. They were so happy and excited that they didn’t think that their homes being very far from the hall; about 60km. In the beginning, the children thought that they could ride their new bikes all the way home. However, after riding about 18km with their mothers or grandmothers on the back of their bikes, they had to catch the bus because they were so tired. 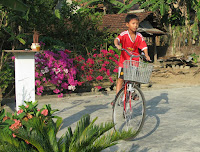 ‘N’ is a very good student as well as a good boy. When we arrived at his home, he was riding his new bike in the front yard “in order to get familiar with it” he said. I could feel his happiness through his big smile and in the concentration of his bike riding practice. 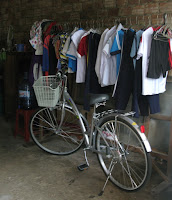 ‘A’ said she loves her new bike very much. Its color is totally her favorite color. Her father who has had a stroke shed tears when he told us about how happy he was when ‘T’ got the new bike, as his family can’t afford to buy her one. 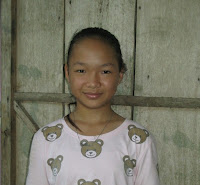 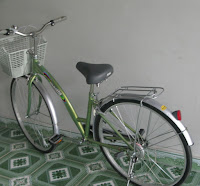 ‘T’ received her bike on the weekend and she couldn’t use it right away to go to school, therefore, she tried to find any chance to use it, such as going to the shop, and taking her brother around her village on her bike. She also takes good care of her new bike, taking it inside her house when she goes home and cleans the dust off it often. Her grandparents suggested that she could put it in the front yard but she didn’t want to. She said it’s much safer inside the house as she doesn’t want it stolen.

Bikes are not only important to help children to go to school but also they bring them happiness.