Larry and Judi, of 'Chances for Children International' met with more of the children their donation has helped 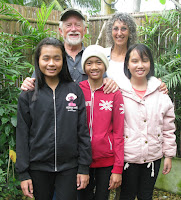 This week Larry and Judi, of Chances for Children International, were able to meet with three more of the children their donation has helped. The girls travelled a long way to come and meet them at CEF in Hoi An.

One of the young ladies is a university student studying to be a herbal doctor, and is a hard working student. The other two are in school and working hard so that they can get into university. One hopes to be a teacher and one a doctor. They are very shy and not confident as they come from a very poor community in a mountainous area.

The university student was an inspiration for the younger girls as she comes from a very poor situation yet is ambitious, hard working. She has become a confident young lady as she has gained a lot of confidence since entering university. Clearly she was proud to be a university student and expressed gratitude for this support and this wonderful opportunity. We feel she is destined for success.

It was a lovely meeting that everyone enjoyed with a lot of questions and sharing. Larry and Judi encourage the girls to go for their dreams and affirmed that anything is possible and just because they are very poor and females in a patriarchal society, they must not let that hinder them in attaining their goals.

Nicholas Kristoff believes that 2016 has been the best year in the history of humanity and it may be true. Living here in Vietnam I can't see it though. The rich are getting richer, the poor stay the same or their situations get worse, unless they have outside help and support.

Policies introduced here mean that many of the poor will receive less help, or no help and already we see some families falling into despair having lost what little support they were receiving.

Now some families have family members dying instead of being able to control major health issues as they now they can't afford the medications they need to help control their health issues. Families with poor health or serious problems are not going to the doctor to find out what is wrong as they can't afford to get there or afford the medications.

More families are contacting us at CEF to ask for educational support as they no longer have any reductions at school for their children. We believe more families will withdraw children from school and send them to work as now they can't afford not to have them working and contributing to the family.

Beginning of the article by Nicholas Kristoff and a link to read the remainder of it:
"There’s a broad consensus that the world is falling apart, with every headline reminding us that life is getting worse.
Except that it isn’t. In fact, by some important metrics, 2016 was the best year in the history of humanity. And 2017 will probably be better still.
How can this be? I’m as appalled as anyone by the election of Donald Trump, the bloodshed in Syria, and so on. But while I fear what Trump will do to America and the world, and I applaud those standing up to him, the Trump administration isn’t the most important thing going on. Here, take my quiz:
On any given day, the number of people worldwide living in extreme poverty:
A.) Rises by 5,000, because of climate change, food shortages and endemic corruption.
B.) Stays about the same.
C.) Drops by 250,000.
Polls show that about 9 out of 10 Americans believe that global poverty has worsened or stayed the same. But in fact, the correct answer is C. Every day, an average of about a quarter-million people worldwide graduate from extreme poverty, according to World Bank figures....."
Continue reading the main story

I'm on my annual visit to Hoi An and this year the timing is right before ​the Tet (New Year) holiday, which is a major deal in Vietnam and unlike any holiday in the U.S. The celebration lasts a week, with planning, shopping and preparation taking twice that long. It's a party that includes visiting friends and relatives and lots of eating and drinking. For many, it's also a week-long work holiday. 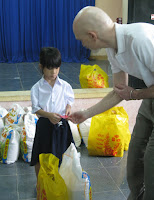 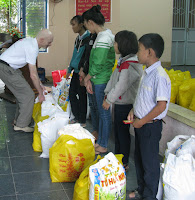 CEF helps our sponsored children and their families join in the celebration by distributing food parcels, which include a big sack of rice, cooking oil, crystalized ginger, watermelon seeds, peanuts and other goodies so that they can eat well and enjoy this special time of year. 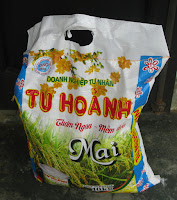 On 22 January, a gray and drizzly day, Linda and I and the four staff drove 3 hours to Hue to visit two teens in the CEF program to distribute Tet parcels and check on their school grades.  (The staff then spent the afternoon in an anti-trafficking training session learning to teach effective methods to young girls so they can avoid predators.)  One of the girls is doing very well in high school and has a good chance to have a much better life for herself in the future.  The staff questioned her about her goals for the future, helping her refine her plans and match her talents with her eventual studies at university.

The other girl, 'M', is a different story.  While all of the children helped by CEF are very poor, M's family's poverty really is abject. She lives with her father, who is mentally ill and rarely able to work, and her 56-year-old mother, a tiny woman who works at several low-paying jobs, including back-breaking farming work. She's healthy but looks almost worn out. They live in a small, unfinished brick and cement house that lacks windows and doors, with a tin roof containing numerous holes that leaks badly during heavy rains. 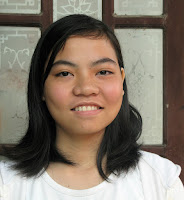 M, who is quiet with a shy, beautiful smile, was training as a nun in a pagoda before returning to her family last year. She so far hasn't been able to earn good grades in school and her ability to escape the desperate poverty, arduous physical labour and hopelessness of her mother's life remains in doubt. Sitting on plastic stools in their house on a dark grey day, listening to the staff inquire about her life, tugs at the heart.  On the ride back, we discussed the best way to support M to have a life with a better future.  No definite solutions at this time, but one idea that may work is to get her into a restaurant / hospitality training program with an NGO in Hoi An.  In the meantime, we know that M and her family at least will have a better Tet celebration due to the generosity of our CEF donors. 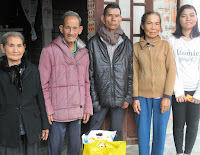 Today, CEF was very happy to welcome our donors – Larry and Judi and one of their sponsored students at the CEF office.

Thanks to Larry and Judi, and the donors of their organization ’Chances for Children International’, 7 girls in our education program have the chance to continue their studies.
During their visit at CEF’s office we also shared more information about our work and programs, as well as shared some of the stories about our children.
We certainly hope they will enjoy their stay in Hoi An, and we look forward to seeing more of them during this time.
We are very happy to work with them and their wish to support CEF and to provide educational support for our disadvantaged children.
Posted by Linda at 12:50 AM No comments: