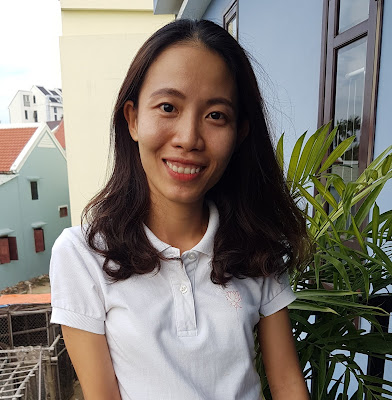 Thuy Tran’s bright smile and cheerful demeanour are contagious. The 32 year old has been bringing her enthusiasm and upbeat personality to CEF for the last 4 years where she manages ethnic children from the Phuoc Son District – a mountainous area near the border between Vietnam and Laos.
After studying Hospitality Management at University, Thuy applied for a volunteer position within a local NGO and was very quickly hired as a fulltime member of the staff. For the next 6 years she experienced firsthand the eagerness of the poor children to go to school and learn, but how they were hindered by the economic instability of their families.

After 6 years Thuy resigned from her position as the NGO’s funds we
re running low and she believed they should be spending their money on projects and not on her salary. During that time of unemployment she started her own charity with some of her friends which assisted underprivileged primary and kindergarten age children with school supplies and taught workshops on personal hygiene.  It wasn’t long, though, before Thuy was snapped up by Linda Burn of CEF Vietnam and the rest, as they say, is history.

Not only does Thuy support children in the ethnic community from the Phuoc Son District under the CEF programs, she also trains older girls, who have already gone through university and want to give back to their community, to give workshops on personal hygiene and nutrition. She told me how she proudly watched one particular ethnic student grow from a shy, unconfident young girl into a mature and strong young woman who felt able to give community workshops to nearly 150 children at a time, and go on to be a teacher herself.

It is an ongoing battle for the women who work for CEF to stress the importance of education to the parents in these ethnic communities where children are encouraged to leave school to work on farms or in paddy fields to bring money into the family home.  There are exceptions, though, and Thuy told me of one woman who had 7 children and was without a husband.  At 70 years old, she still does manual work daily in the scorching heat to help support her children through their education.  Unfortunately, she is in the minority.

It’s not a given that graduates from University in Vietnam will get a job so Thuy coaches the students in her care to get the highest possible grades, to network with other teachers and schools, and continually improve their communication skills to increase their chances of employment.

Since working with CEF, Thuy has noticed that the dropout rate of students from the programs has decreased.  She believes that this is, in part, due to the life skills workshops that CEF offer.  They teach the girls about sex education, healthcare, nutrition and sanitation which leads to less teenage pregnancies and improved health. The girls also begin to understand more about the ‘outside world’ and that University isn’t the only option for them after High School as there are many careers available such as cook, waitress or hairdresser.  There is a gradual realisation that there is more to life than having children at a young age and working on a farm.

In Thuy’s own words: “The sexual education workshops we teach are not only for the girls to understand how to protect themselves and to use contraception.  We teach them how to deny their boyfriends sex, if that is what they want, but to also still have a good relationship.”