Hoa has a sponsor 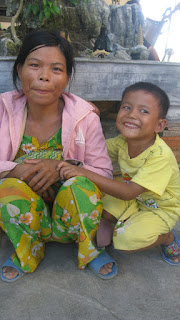 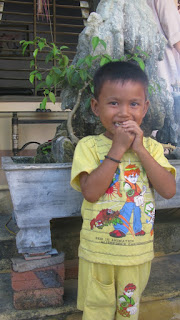 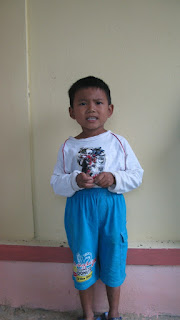 Another of the boys on our waiting list has been sponsored. Little Hoa is such a cute little lad and loves school. He is tiny and looks much younger than his years. He is now doing his first year of school. He couldn't enter school last year when we heard about him not being in school. It's not possible to enter the school system without a birth certificate. His parents were too poor to get him one, but a kind Buddhist nun organized it and payed for it. So now Hoa can be educated!

His mother looks after his little sister and dad is a building labourers assistant. In the rainy season it is hard to get work, but he works whenever he can. But in his job he can't earn much.

I visited recently and to my delight the local government has provided them with some funds for a home. Before they lived in a tiny bamboo and palm leaf shack. The funds were a tiny amount, but as dad has building experience they have managed to built a basic, tiny three-room home with the funds. There is a tiny living room - shrine room and a bedroom and kitchen. Bathrooms are expensive so they still use the back garden for a bathroom.

Linda at Go Philanthropic found a sponsor for little Hoa who is doing very well at school already.
Posted by Linda at 5:01 AM