There is an old cliché along the lines “every little bit helps”.   And I believe that to be a truism it can be applied to things we can do to assist the development of living standards for those in countries less fortunate than our own.

Few of us have the resources to be able to make a massive impact on “changing the world for the better”.   However, it does not take a lot to “make a difference” for an individual in parts of the world where sheer survival can be a daily struggle.

Many words have been written on the benefits that flow from education.  It is demonstrated that not only does improved education enhance the economic prospects of a nation, but also, and particularly in the case of girls, it has an enormous impact on social and political development.

To quote UNICEF:  “There is vast evidence suggesting that countries with better gender equality and less gender disparity in primary and secondary education are more likely to have higher economic growth. Some countries lose more than $1 billion a year by failing to educate girls to the same level as boys.
An educated female population increases a country's productivity and fuels economic growth.
More educated women tend to be healthier, work and earn more income, have fewer children, and provide better health care and education to their children. Girls' education literally saves millions of lives.”

During the course of my many visits for Linda to the village of Phuc Le in northern Vietnam over the past ten years, I have been blessed to be able to observe the emergence of a whole new generation of young women.  Shy young girls of nine years have, as a result of being supported over ten years of schooling, developed into articulate, confident young women; ready to pursue higher studies or take their place in the work force in jobs their mothers could not have dreamed of. 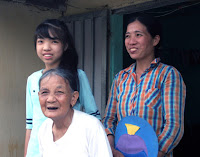 CEF’s Graeme, who accompanied me on my most recent visit, took to exploring the level of education attained by the various generations of women represented in each family; in many cases three.   As could be expected, most of our girls’ mothers had not progressed beyond primary school levels, and many of the grandmothers had never had any schooling.  Their lives have generally involved years of hard work growing rice to feed the large families they have borne. 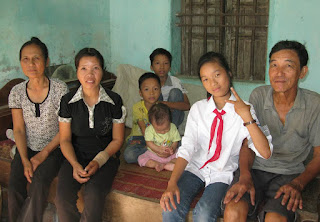 It is most gratifying to realise that due to the efforts of those who support Linda and the CEF team, the next generation of these families can aspire to a better all round lifestyle.  And the obvious delight of the mothers and grandmothers at the improved future that awaits their daughters / granddaughters is quite wonderful to see.

So, congratulations to all you out there who are “making a difference”