The challenges of one the girls Children's Education - Vietnam helps

When we first met Tram's mother she had socks on that still showed she had no toes, she hid her hands as she only had some of her fingers remaining. Her facial color was uneven, her skin rough and lumpy. Now in her 40's, she looks about 60 years old.

She had leprosy while a young woman. She is blessed with a beautiful daughter, Tram. With the help of her sponsors Tram has received educational support for the last two years allowing her to continue her education beyond primary school. Without that help she would be out working already to support her mother and herself. 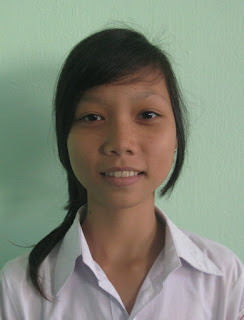 As Tram's mother is not able to work much or look after Tram easily, Tram moved to live with caring relatives far from her mother. She speaks to her mother on the phone but rarely sees her as it is expensive to get from where she lives to her mother.

Tram nearly left school a few months ago as she was so distressed that her mother was in hospital for months, while they tried to fight the bad infection in her mothers foot. She hadn't realized it was so infected as she had almost no sensation in her feet. In the end gangrene started to set in and she had to have the leg amputated. So she had months in hospital with little care and then months recovering at home with little care. Tram's mother made a surprising stand and said she did not want her daughter to look after her, but wanted her to become an educated person and have a better life than she has had.

Tram's relatives are aware Tram is distressed and struggling to concentrate on her work. Besides this stress Tram has thyroid problems which are controlled moderately well by medicine but she probably will need to have surgery in the next few years.  For such a young girl it's a lot of stress to bare.

Tram is being brave and trying to study hard and do well at school to please her sponsors and her mother. Her mother should have healed soon and will then have a new leg fitted. Once she is used to that we hope she will be able to get around and have some quality of life and perhaps be able to get some work once she is more able bodied, which would help reduce Tram's worries and reduce the stress for Tram's relatives.
Posted by Linda at 12:09 PM