Second-hand bikes for two of the CEF - Vietnam children

Children's Education Foundation - Vietnam was given two second-hand bikes in good condition by Tom and Louise who had been volunteers in Hoi An for over a year. We happened to have children in our education program in need of bikes at the time they left, so this gift was perfect timing. 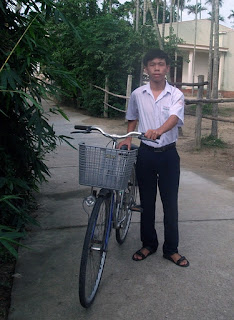 So Nam received Toms' bike and Bao Tram received Louises' bike. I had given my old bike to Nam about three years ago when I realized I wasn't using it much. With Hoi An having very wet winters and with the salt in the air from the ocean, the bike I had given him was in need of constant repairs over the last year, so now Nam is thrilled to have a good second-hand bike and can reliably cycle to his high school which is about 12 miles from his home.

Nam's father can work very little as he has severe back pain due to injuries resulting from many years of heavy labor.  His mother is a housekeeper. He has help with his extra tuition through CEF - Vietnam. 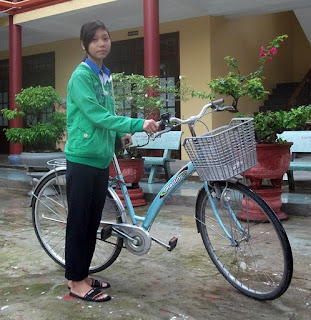 Bao Tram lives a long way from Hoi An, but her uncle who she lives with brought her to Hoi An to pick up the bike. She has been walking the 5 miles to school each day, but in our rainy season with three to four months of torrential rains that equals being soaked by the time you get to school, even with if you use an umbrella and wear a waterproof. So they were both more than happy to come to Hoi An to get the bike!

Tram has no father and her mother is classified as a 'leper' although she had leprosy while young and has been treated. She has poor health and recently one of her feet got severely infected resulting in it having to be amputated. She is still recovering from the surgery and won't be able to do any work for some time. Tram now lives with her uncle and his family. Tram has a sponsor who pays all her education costs.
Posted by Linda at 9:36 AM